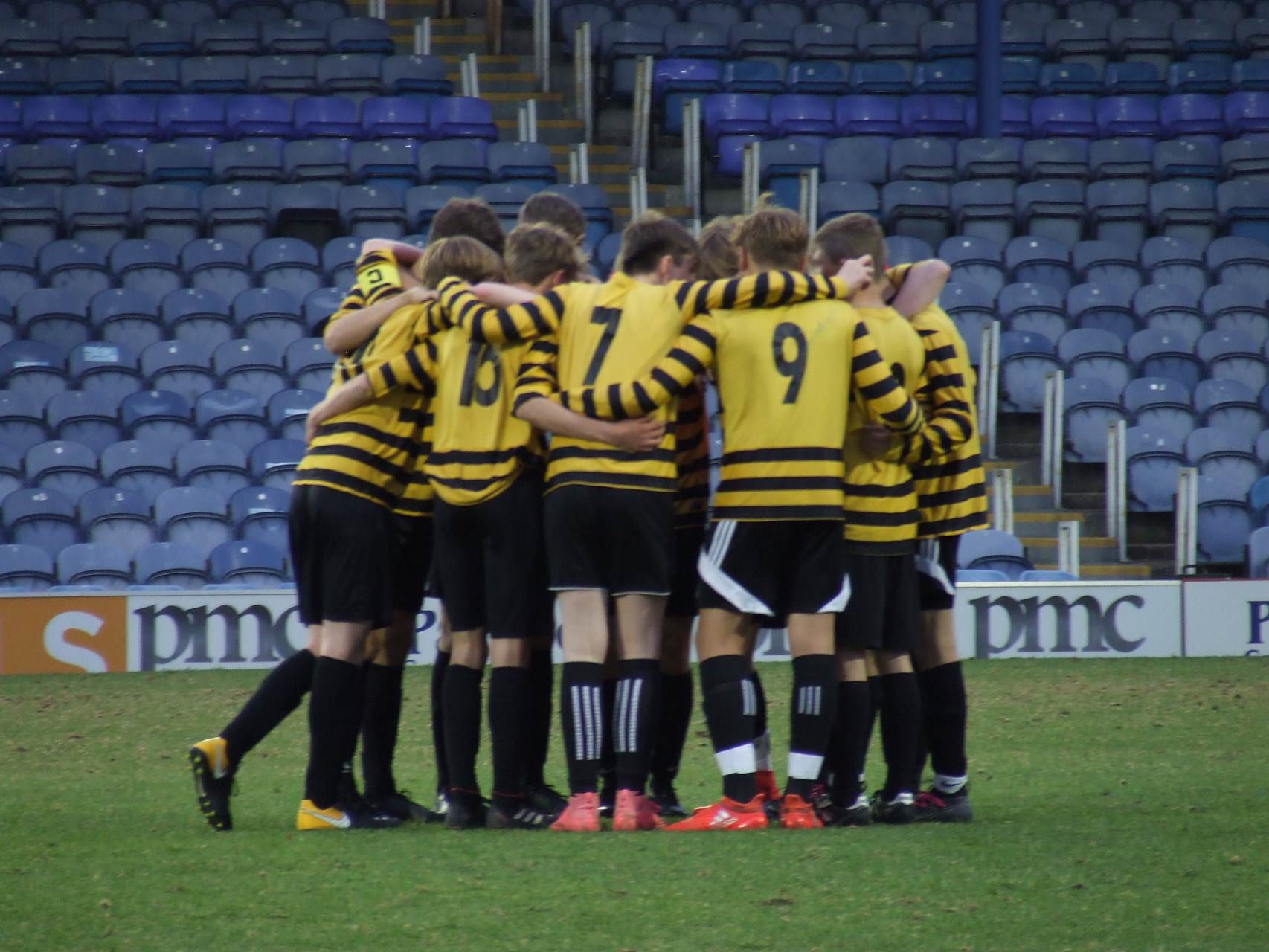 ?Our Year 10 boys went into the final unfazed by the task in front of them as this was their third time in the final in four attempts. The boys were hoping it was third time lucky after two previous losses. The game, which was played at Fratton Park, home of Portsmouth FC was the last of three finals which our opponents, Mayfield, had competed in.

The game started with a high tempo with both sides looking to get the advantage early on. The Mayfield defence struggled to get to grips with Kai Henderson?s pace and footwork and paid the price when they made a missed time challenge and the referee awarded a penalty. The penalty seemed a little harsh but up stepped the captain, Sam Thomson, to coolly slot home to put us 1-0 up. This fired Mayfield into action and they got a deserved equaliser mid-way through the half, which was the end of the scoring in the first half.

The second half continued as the first half had left off, end to end action with both teams playing some good football. Mayfield then took the lead with their two academy boys linking well to take the advantage. John Hanson then started to push for the equaliser, which left us exposed at the back. Goalkeeper, Ruben Hunt pulled off numerous saves to keep us in the game and then came the moment the team had been working so hard for. A corner from Sam Thomson was flicked on and substitute Owen Mulley, who hadn?t been on the pitch long, superbly converted to bring the game level with 5 minutes to go.

They often say a team is most vulnerable after just scoring and this was true for us. Mayfield found a gap and their captain capitalised by slotting the ball past a helpless Ruben from 10 yards out. The team pushed for the equaliser, but Mayfield broke to put the game out of reach. The boys were dejected but showed great sportsmanship to congratulate Mayfield on their victory.

I can remember part of the team talk after last year?s loss, where I asked the boys to learn from the performance and take it forward with them. Often in teaching, we constantly question ourselves as to how we can facilitate the students to remember content that we have taught them. I have no doubt that the boys had learnt from last year?s performance and in the team talk at the end of the game I had only words of praise and sense of pride at the way the boys had performed.

I really hope the boys can reflect on their amazing performance and feel the same pride as I did on the night. Our Headteacher, Russell Stevens, often talks about crucial experiences that happens outside the classroom and this display of teamwork and work ethic is surely what he means.

A massive thank you to everyone who had sponsored the team going into the game and also to anyone who came to watch, you certainly got value for your entrance fee! Your support was greatly appreciated by the PE Department and the boys.

Recently a group of 28 Young Leaders from Year 7 to 10 helped out managing, umpiring, scoring and encouraging at 2 Primary Netball Tournaments.  Over 200 pupils from 14 of our local town and rural primary schools took part.  The bad weather held off during the first tournament which ended with St Johns being crowned the winners of the Town Schools competition.

Later, the rain set in and persisted throughout the entire tournament but it did not dampen the enthusiasm of the participants and the Young Leaders.  Appleshaw took the victory  for the Rural Schools.  All of the Young Leaders went to the meeting room to receive well-earnt Headteacher?s awards from Mr Stevens and doughnuts, cookies and hot chocolate from Mrs Vant. 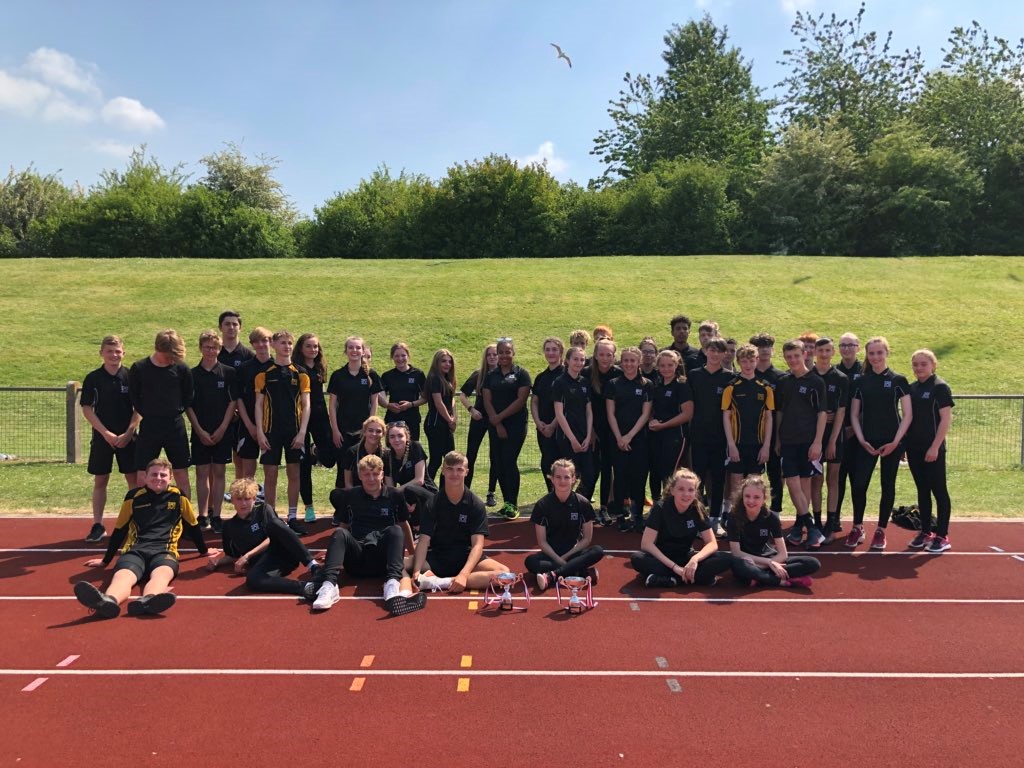 Recently 51 Year 9 and 10 students represented John Hanson at the annual District Athletics competition. The teams went into the competition with high hopes of retaining both titles and they did not disappoint.

There were a number of notable individual successes throughout the day. The first came on the track where year 9 boys captain Paddy Turner completed a middle distance double winning both the 800m and 1500m. Then was the turn of year 10 girls captain Rosie Kavanagh who stormed home to win both the 100m and 300m, before bringing home the baton for the winning year 10 girls relay team. The Year 9 boys also completed a faultless relay performance with Dan Neale, Leonardo Ferro, Kyle Cooke and Josh Bond teaming up to take the victory.

There were also a number of 1st and 2nds on the day, the first of which came in the year 10 girls Javelin where Abby Hiller pipped Mackenzie Washer to the victory. The Year 10 Boys Javelin saw Connor Hayward win by just 30cm over Freddie Horner in 2nd. It was then the turn of the track athletes, Jack Butt edging out Jordan Davies in the year 10/11 boys 1500m to take the title. In the year 10 girls 100m Sophie Bates followed home Rosie Kavanagh to complete yet another 1,2 for John Hanson.

The students also showed tremendous team spirit after a couple of late call ups and drop outs they ensured all the events were filled. A special mention to Max Lunn, Mackenzie Washer and Katie Haynes who all finished in the top 5 in their event after standing in at the last minute.

The excellent performances on the day saw the year 9 team take the overall victory by over 60 points and the year 10 team take the victory by a whopping 90 points. Well done to all the students who represented the school and good luck to the 19 students who qualified to represent Andover District at the County event in Basingstoke on Saturday 8th June.